Offense is more than setting balls to the pins. 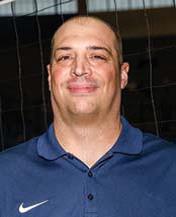 Learn from a defending state champion coach, Brad McCarter from Lafayette Central Catholic High School on how to add variety to your offense and bring energy back to hitting lines.

Brad was born and raised in Lafayette. He played four years of varsity high school volleyball and four years of basketball Lafayette Jefferson.  In 1998 the Bronchos won the IBVCA Boys’ State Championship and the 1998 AAU Boys’ Open National Championship during his Junior year.  In Brad’s four year playing career at Lafayette Jeff they qualified for the State Tournament each year, he was also named to the senior All Star Team.

Brad began his coaching career at Sunnyside Middle School at both the 7th and 8th grade levels. Brad also has coached many different age levels. In 2006 he took the varsity assistant coaching job at Central Catholic High School, after 2 seasons as a JV coach and Varsity Assistant, Brad took over the Knights in 2008 and in that season was named I.C.G.S.A. Class A North coach of the year.  In 2010, he lead the program to their first ever volleyball State Championship and was titled the Class A State Coach of the Year. In 2013 and 2015 Central Catholic were the Class 1A State Runner Up, this past season in 2017 the Knights were once again crowned the IHSAA Class 1A State Champion.  In his short tenure Brad and his teams have earned a 276-83 record.

Brad and his wife Heather, still live in Lafayette with their son’s Keegan (9) and Drew (3).