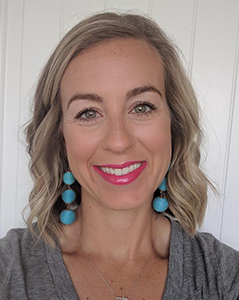 Learn from a Coach Stephanie Bloom whose philosophy is “Always outwork our opponent and to frustrate them with our relentless defense.”  Bloom and her Yorktown Tigers will be presenting a session titled Ball Control/Competitive Practices. Ball control is the basic foundation that every winning team embraces.

Stephanie Bloom, is the wife to Patrick (principal at Cowan Jr/Sr High School) and mom to Grace (5) and Griffin (4).  She played volleyball at Ball State University as a libero and majored in Math, Secondary Education.  This fall will be her 13th year as a head volleyball coach and high school math teacher. She was at Wapahani for two years and at Yorktown for the past 10 years.  Bloom has been blessed to be a part of three state championships at Yorktown; 2000 as a player and 2011 & 2016 as the coach.  Her teams have been state runner-up in Class 3A three different times as well: 2009, 2012, & 2015.

“Coaching is my passion not just because I love the game, but because I love the opportunity to not only mold each player into the best volleyball player I can, but to push them outside themselves to make them better young women who will have the confidence to lead and influence people positively for the rest of their lives.”